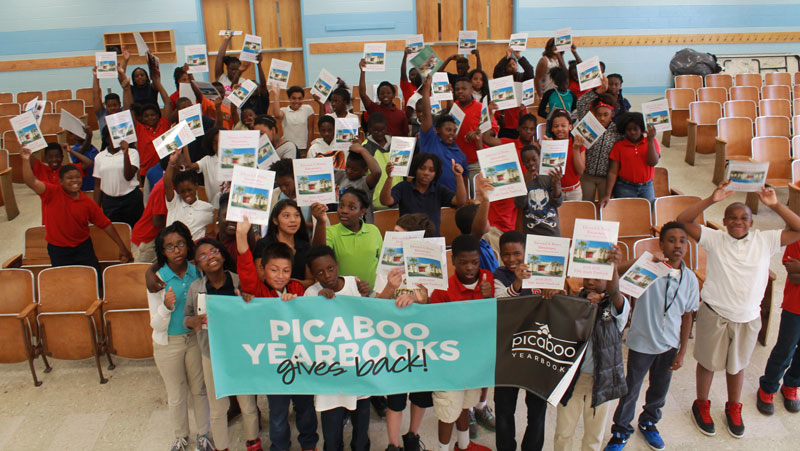 “We have not had a yearbook for years because we haven’t had the funds. We are a Title 1 school, and many of our students’ parents struggle to meet their daily needs, so asking them to cover the cost of a yearbook is not viable,” said Principal Lynn Owings. “We are so grateful to Picaboo Yearbooks for generously providing more than 100 free yearbooks for our graduating fifth graders.”

“When I heard the Burns Elementary story, I knew just how we could help,”  Lisa Dean, Director of Sales, Eastern Region, Picaboo Yearbooks.

Picaboo Yearbooks’ Yearbooks for Everyone Fund allows them to provide yearbooks for students in need. The fund is partially funded by customer contributions.

Picaboo Yearbooks holds a contest each fall to award free yearbooks to schools in need, many of them Title 1 schools like Burns Elementary. After awarding more than 350 yearbooks to contest winners, Miles was able to earmark the remaining portion of the funds for the 2016 school year for Burns Elementary.

Because Picaboo Yearbooks guarantees a turnaround time of only 3-weeks, the yearbook team led by Brett Sires, fifth grade intern teacher, at Burns Elementary was able to quickly assemble the yearbook and include events up through late April.

Students received their surprise gift at a special ceremony in the school’s gym.

“We are so excited that our fifth graders will have something to remind them of their wonderful years at Burns Elementary.” said Owings